Coronavirus (COVID-19) - We are now in a national lockdown: stay at home. Find out how it is affecting our services. 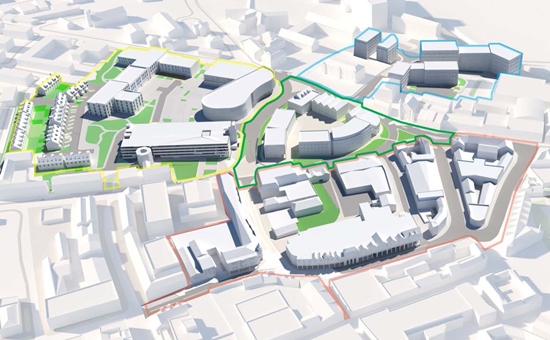 The Northern Gateway is a highly visible location centred on the meeting point of Newbold Road, Sheffield Road and Saltergate at the Holywell Cross roundabout, in close proximity to Chesterfield College, the University of Derby’s Chesterfield Campus, Chesterfield Waterside development site and the railway station - recently earmarked as a potential stop for HS2.

Chesterfield's retail centre is to the south, focused around the market square and Vicar Lane, which link to the Northern Gateway via Elder Way and Packers Row.

As the council owns much of the land and property in the Northern Gateway area, we are in a strong position to progress an early phase of proposals.

We have also secured funding support from the Sheffield City Region Investment Fund to carry out developments that will stimulate future investment in this area, including:

We're working with existing stakeholders to build a vision for the Northern Gateway, to show how investment could be directed into the area in future, and we're keen to work with investors and developers with proposals for this area.

The refurbishment of the former Co-operative Department Store on Elder Way is well underway and Jomast developments handed the upper floors over to Premier Inn hotel in April 2019, where business is doing well.  A few of the ground floor retail units are currently under offer to food and drink establishments hoping to be open early 2020, and a fitness gym is planned for the expansive basement area.