Coronavirus (COVID-19) - how it is affecting our services

The mayor of the council carries out our civic ceremonial duties and chairs meetings of the full council. The mayor is elected annually by the council.

The Mayor of Chesterfield for 2019/20, Councillor Gordon Simmons

Gordon was born in Chesterfield and went to the Harry Cropper School (now a GP surgery) on Ashgate Road. 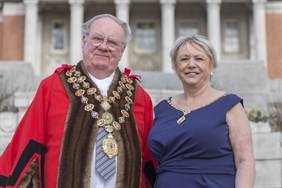 On leaving at Christmas 1960 he tried a number of different job options before beginning work at Robinsons, where he met his wife of 49 years, Jenny.  Gordon values the support she has given him throughout these years.

Gordon was first elected as a councillor for Dunston ward in 1999. He has lived in Dunston for 42 years and he is a familiar figure in and around the area.

Gordon’s hobbies include gardening and music of all genres. His favourite band is The Rolling Stones, who he met at a concert in Roundhay Park in the 1980s.

Gordon and Jenny enjoy visiting the Derbyshire countryside and the east coast, although a favourite holiday destination is Torquay.

As Chair of Age Concern, Gordon supports their work actively.  His love of gardening is reflected in his extensive involvement in Chesterfield in Bloom.

He is also a trustee of Uncle Billy’s children’s fund which provides an annual outing for children and parents in the Whittington Moor and Dunston areas.

Gordon is honoured to be Mayor and is looking forward to a busy year meeting as many people as possible during his term of office.

Personal message from the Mayor

“I am very honoured to become the Mayor of Chesterfield. Our town is a great place to live and work. I look forward to playing my part to help make it an even better one in our Mayoral year.”

Kate was born in Chesterfield and has lived and worked here all her life.

She attended Chesterfield St Helena Girls High School and studied a full-time secretarial course at Chesterfield College, then known as “the tech”.

After a number of secretarial and office management jobs, Kate took a career break to raise her two children, Lisa who now lives in Australia with her husband and two adorable daughters, Jocelyn and Beatrix; and son Alex who followed an army career and is now working in the building trade.

On returning to work, Kate worked as a senior manager in the NHS up to retirement.

During that time, she was secretary to the Ashgate Hospice Fundraising appeal where she still volunteers. She also supported the Combat Cervical Cancer and Donate an Organ appeals as a voluntary admin and fund raising support.

Kate has a proud history in Chesterfield where her father served as a Councillor, Mayor and Honorary Alderman.

It is therefore a matter of great pride for Kate to be honoured to act as Mayoress to Gordon, a long standing family friend and fellow Councillor.

Like Gordon, she feels it will be a privilege to serve the borough of Chesterfield in this way and to meet as many of its residents as possible.

Personal message from the Mayoress

“It is a great honour to be mayoress this coming year. I will support Gordon wholeheartedly during the Mayoralty. We feel proud to serve the Borough of Chesterfield and are looking forward to
meeting as many of our local residents as possible.”

The Mayor’s charity is Age Concern.